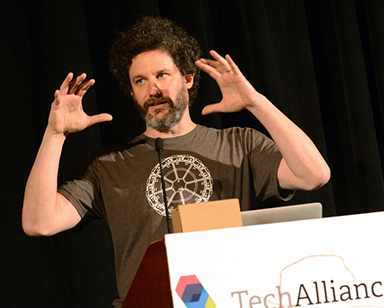 Our very own Steve Seitz, who splits his time between UW CSE’s GRAIL group and Google, features prominently in a recent article by Xconomy’s Ben Romano that explores the technology behind Google Cardboard and Google Jump. Referring to Seitz as Google’s “teleportation lead” (which has to be one of the coolest tech job titles we have come across thus far), the article looks at what’s next in the quest to bring virtual reality to the masses and our region’s emergence as a center of VR innovation.

“Regardless of the viewing device, virtual reality needs content. And much of Google’s work to enable creation of virtual reality content—from high-end video capture rigs for professionals to a more accessible way of taking virtual reality panorama photographs with your smartphone—has been carried out by a Google team in Seattle, led by Seitz…

“‘One of the applications that I am most excited about in VR is teleportation,’ said Seitz…’So basically, trying to take you somewhere that you’re not. Really that’s the goal of VR.’

“But before you can teleport with virtual reality to Iceland or the surface of Mars, someone or some thing has to go there first with a camera to capture the sights and sounds.”

That is where Seitz and his team, in collaboration with camera maker GoPro, come in—along with some heavy-duty computing power furnished by Google.

The article offers a comprehensive look at the company’s evolving ecosystem of VR technologies, including the challenges Seitz and his colleagues have to overcome in order to deliver a truly immersive experience, and looks at what may be on the horizon now that VR is no longer just in the realm of science fiction. Check out the complete article here, and read our past coverage of Seitz’s work on Google VR here and here.

Published by Kristin Osborne on February 10, 2016