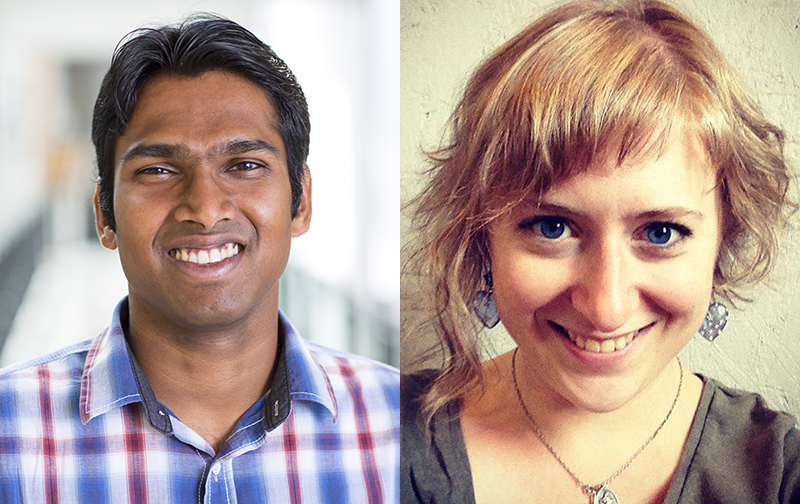 ACM SIGCOMM has selected two winners of its 2016 Doctoral Dissertation Award recognizing outstanding Ph.D. theses in the fields of computer networking and data communication from the past year, and both recipients have strong ties to the Allen School: former postdoc Vamsi Talla, and bachelor’s alumna Justine Sherry.

Recent Allen School postdoc and UW Electrical Engineering Ph.D. alumnus Vamsi Talla is recognized for “Power, Communication and Sensing Solutions for Energy Constrained Platforms.” Working under the guidance of professors Joshua Smith of the Sensor Systems Lab and Shyam Gollakota of the Networks & Mobile Systems Lab, Talla and his collaborators developed a way to harvest energy from ambient signals such as television and Wi-Fi to power battery-free devices. This technique, known as ambient backscatter, shows great promise for enabling lower-power sensing and communication to realize the full potential of the Internet of Things.

The SIGCOMM award is the latest in a line of honors Talla has received for his work. Previously, he received the ACM SIGMOBILE Doctoral Dissertation Award and the WAGS/UMI Outstanding Innovation in Technology Award. The research team has also won multiple, recent Best Paper Awards for projects related to backscatter, including SIGCOMM 2016, NSDI 2016 and SIGCOMM 2013. Talla is currently the CTO of Jeeva Wireless, a startup company he and his colleagues launched to commercialize their research.

Undergraduate alumna Justine Sherry (B.S., ‘10) is recognized for her Ph.D. dissertation at UC Berkeley titled “Middleboxes as a Cloud Service.” In her thesis, Sherry describes APLOMB, a system that enables enterprises to outsource middlebox processing, such as firewalls and caches, to a third-party cloud service or ISP — providing benefits in terms of scalability and ease of management while reducing costs.

Sherry is now on the faculty at Carnegie Mellon University, where she continues to focus on middleboxes as part of her computer networking research. She previously earned a Best Student Paper Award at SIGCOMM 2015 for presenting a novel design for fault-tolerance in middleboxes. As an undergraduate, she received the Allen School’s Best Senior Thesis Award for her 2015 bachelor’s thesis, “Applications of the IP Timestamp Option to Internet Measurement,” which she completed under the guidance of professors Tom Anderson and Arvind Krishnamurthy. She also co-authored the Best Paper at NSDI 2010 presenting a new internet diagnostic tool, reverse traceroute.

Talla and Sherry will be honored at the SIGCOMM 2017 conference later this month in Los Angeles, California.

Published by Kristin Osborne on August 7, 2017