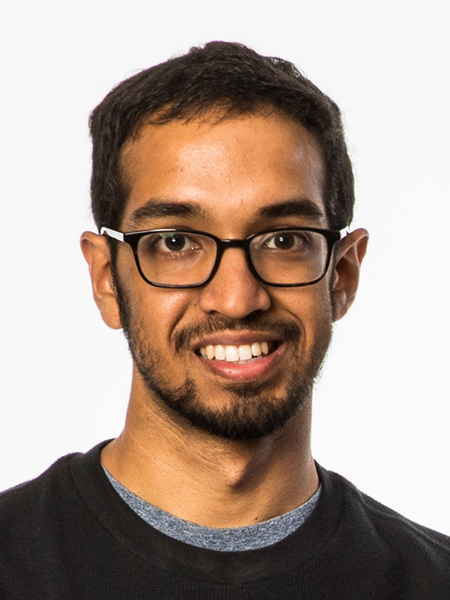 Vikram Iyer, a Ph.D. student in Electrical Engineering who works with professor Shyam Gollakota in the Allen School’s Networks & Mobile Systems Lab, has earned a prestigious Microsoft Research Ph.D. Fellowship. He is one of only 10 graduate students from across North America to be selected as a member of the class of 2018 fellows.

The Microsoft Research Ph.D. Fellowship program is designed to promote the careers of promising student researchers in computer science, electrical engineering, mathematics, and related fields. For the class of 2018 fellows, the company specifically sought applicants in two key areas of interest: systems and networking, and artificial intelligence. Iyer has already made significant contributions to the former through his work on wireless power, communication, and localization.

In one recent, high-profile example, printed Wi-Fi, Iyer and his colleagues demonstrated how to create smart objects made entirely out of 3D printed plastic parts. To enable the objects to communicate over Wi-Fi without the need for batteries, the team relied on an ingenious combination of old and new techniques. They harvested power from the physical action of gears, coil springs, and other components — not unlike how a mechanical watch keeps time — and leveraged the lab’s pioneering work on backscatter, a method of wireless communication in which devices reflect ambient radio frequency signals that can be decoded by a Wi-Fi receiver.

Backscatter formed the basis of Iyer’s work on another project, interscatter, that enables implantable and other devices to communicate with smartphones and smartwatches by converting Bluetooth transmissions into Wi-Fi and Zigbee-compatible signals. Iyer and his colleagues built several prototypes to demonstrate the technology’s potential, including the first smart contact lens that can monitor and transmit information on the wearer’s medical condition and an implantable neural recording interface. The team, which included Allen School and EE professor Josh Smith of the Sensor Systems Lab, earned the Best Paper Award at SIGCOMM 2016, the annual flagship conference of the Association for Computing Machinery’s Special Interest Group on Data Communication.

In addition to unlocking new applications in battery-free communication, Iyer helped demonstrate that wireless signals can literally unlock a door through on-body transmissions. In this project, Iyer and his colleagues developed a way to securely transmit passwords via the human body using low-frequency signals generated by fingerprint sensors and touchpads on mobile devices. The technology has the potential to do more than open doors; it would also make it easier to link a medical device such as a glucose monitor or insulin pump with a smartphone by eliminating the need to manually type complicated serial numbers or passwords. Other projects that illustrate the range and impact of Iyer’s contributions include FM backscatter, which introduces connectivity to everyday objects using FM radio signals to enable smart fabrics and smart cities applications, and FingerIO, a system for fine-grained finger tracking on mobile devices using sonar that earned an Honorable Mention at CHI 2016, the ACM’s flagship conference on human-computer interaction.

“These are incredibly talented students, the top students from North America,” said Microsoft Principal Researcher and Research Manager Bill Dolan, director of the fellowship program, in a blog post announcing the class of 2018. “We really do want to promote the careers of these great students. It is good for all of us.”

The Microsoft Ph.D. Fellowship provides tuition support, an annual stipend, and funding to cover attendance at professional conferences and seminars. Fellows also have an opportunity to pursue an internship with Microsoft researchers in their field of study. The company has a history of supporting students engaged in leading-edge research at the Allen School, including past fellowship winners Kira Goldner (2017) in theory of computation; Lilian de Greef (2015), Mayank Goel (2014), and Gabe Cohn (2012) in ubiquitous computing; Irene Zhang in computer systems (2015); Yoav Artzi (2014) in natural language processing, and Franziska Roesner (2012) in security and privacy.

Read the Microsoft Research announcement here and learn more about the 2018 fellows here.

Published by Kristin Osborne on January 10, 2018